Tomorrow morning (6:50 am to be exact) I will be leaving Geneva for Toronto.  Once I'm home, I'll be sure to do a bunch of posts to catch up on what's been going on in Switzerland.

Can't wait to see all my family and friends!!!  I've missed you all so much!!

That's right!  On the last weekend of November I made my way back to where my European obsession began: Paris, France.  My friend Lu was in tow as we visited my friend A (a Canadian who I met three and a half years ago in Paris).  Despite both Lu and I being deathly ill this week (Lu was still sick Friday, but managed to suck it up and bear the three hour train ride.  I was very impressed), we refused to spend the weekend in bed.  My horseshoe from September showed itself again and got us first class seats for cheaper than second class (I'm still confused how that worked).  Therefore, despite Lu's crippling pain, the train ride was most pleasant.  I think I enjoyed it more than she did though.

We arrived in Paris just after 11pm and made our way over to A's.  Everyone had had a long week and combined with Lu still being under the weather, we decided to have an early night.  And what a great idea it was.  I think I fell asleep as soon as I hit the pillow.

We started off Saturday with the trek to the Eiffel Tower.  Now to those who have never been to Paris, you should be warned.  Despite being able to see the Tower from pretty much anywhere in the city, do not be fooled: it is no where near you.  I made that mistake three and a half years ago when I spotted it from the Louvre.  I stupidly thought to myself, why not go over to the Eiffel with my friends for a bottle of wine and watch the light show before heading home.  It's not far at all!  Moral of the story: I was wrong.  Get on the métro, that's what it's there for.  As long as you don't mind the smell of stale urine among other delightful aromas.

Back to my story: so Lu and I hopped on the métro and made our way to the Eiffel Tower.  Despite seeing the tower every day for almost a month, it still gobsmacked me a bit when I saw it again.  There really isn't anything like it.  So we posed for some pictures, since that's what you do! 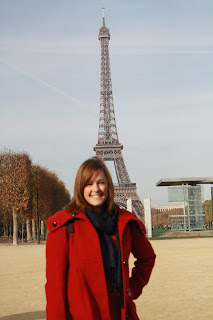 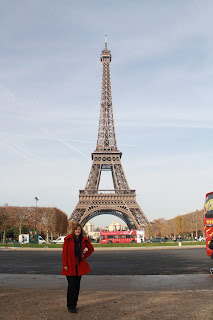 The lines to go up the Tower were about 2-3 hours long, so Lu and I decided that we could save the standing around for Sunday (especially since a girl who feels nauseous probably isn't the best one to be climbing the stairs with).

Since we were now ahead of schedule, we hopped back on the métro and headed over to Notre Dame. Not as busy as I remembered it, although the last time I came was during tourist high season.  Or they were all standing in line for the Eiffel Tower.   Either way, it was fun to revisit.  So we took some more pictures: 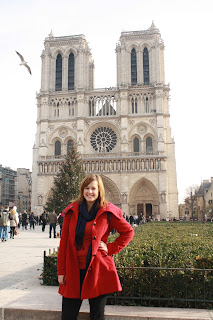 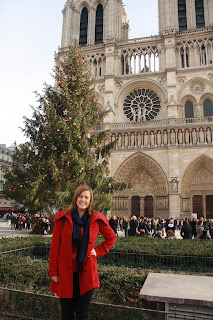 From Notre Dame we walked along the Seine towards the Louvre.  We stopped every once in a while at the stalls along the river bank, and got some good deals on posters and postcards.  Then we found the Louvre.

Last time I visited the Louvre, it was free for anyone under 27 on Fridays from 6-9pm.  They have since changed it, and if I remember correctly, increased the entrance price.  And they don't have student rates, boo.  But it's still worth the price.  It's the Louvre! 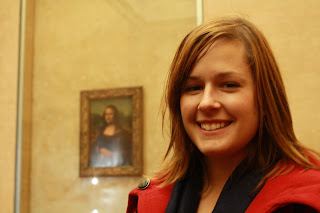 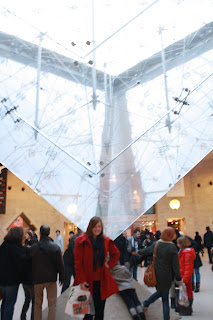 By the time we finished seeing the "must-sees" of the Louvre, the sun was setting and we needed to meet A at the Christmas Markets.  So we made our was through Tuilleries towards Concorde. 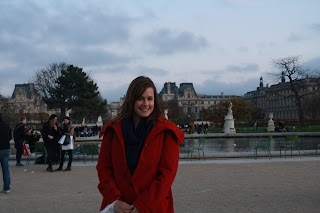 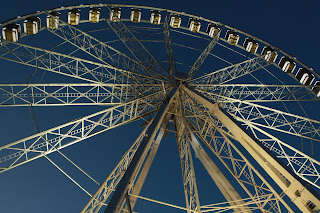 We had decided earlier in the day that we would just find each other at the markets.  How crazy were we?  Really crazy.

So in order to find A, we got some hot wine, and continued to shop.  We're not very smart, okay? 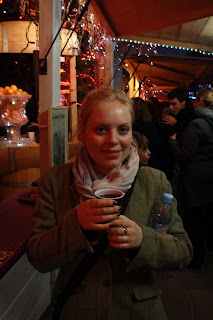 But we were smart enough to have one person on "look-out" while the other browsed the stalls.  It ended up being a good solution since I easily spotted A (still don't know how.  Maybe the horseshoe again?) and we were all together again.  From there we headed down to the lights display at the end of the markets.

We then headed back through the markets and found the most amazing stall ever!  I came back the next day to try some of the wonderful food.  It was okay, not as good as the giant frying pan makes it look.

From the markets we headed over to Chartier for some traditional Parisian cuisine.  By this, I mean rude waiters, cramped tables and delicious escargot.  What else would you expect in Paris? 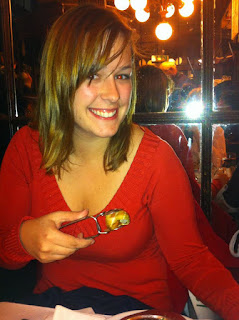 On Sunday we went back to the Eiffel Tower and went all the way up to the top for the best view of Paris.  Too bad it wasn't sunny anymore. 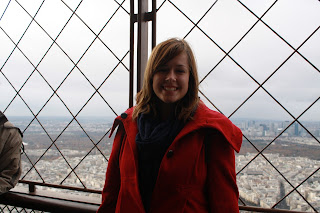 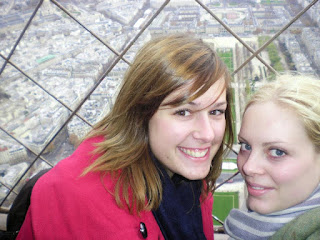 Then we made our way back to Geneva.  We were sad to leave Paris, but since we know we'll go back soon, we were excited to go home.

Thanks for a great trip A!  And thanks for being my travel buddy, Lu!  Can't wait to do it again!