I know this is a highly anticipated post, so of course I'm going to split it into four.  And I'll start off the series with the beginning of my trip: Rome.

On Sunday, February 12th at 5am, I woke up to get ready to get to the airport.  Lu was gracious enough to drive me at the ungodly hour and I am forever in her debt.  I've never been much of a morning person, so despite my excitement to go to Italy, I was feeling mighty tired.  Luckily everything went smoothly through the airport and soon I was flying south to start my week long adventure.

A few years ago, I traveled alone to Paris and experienced terrible homesickness.  I originally attributed this to my lack of a travel companion, and vowed never to travel alone again.  Fast forward to the present, and I was doing it again.  My fingers and toes were crossed that I wouldn't regret it.

I arrived in Rome around 10am and headed straight for my hostel.  I'm forever my mother's daughter, so of course I had my "folder" with maps to every place imaginable in my hand.  This may seem quite ridiculous to the more spontaneous travellers, but that little bit of extra work before your trip can seriously prevent a lot of travel woes.  Trust me.

Thanks to my preparedness (shout out to Girl Guides), I easily found my hostel after a slight disagreement with the train manager about the validity of my ticket (oops!), unloaded my stuff and collapsed on the bed.  But I had no time to be lazy.  I quickly sorted my valuables into a locker, grabbed my camera, my folder, and my bag, and headed out to see the sites.

Upon exiting the subway, I headed up the stairs to the street, I looked up and saw this.  I was gobsmacked.  Walking out of such a modern mode of transport and seeing the Roman Forum ruins was one of the most amazing experiences of my life.  The photos truly don't even do it justice.  And I don't think I even saw most of it clearly since my eyes were half-blurred with tears since I couldn't believe what I was seeing (and I was extremely exhausted...I think that had something to do with it).

Ruins of Rome - The Roman Forum 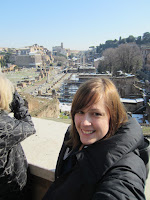 Outside the Santa Maria in Aracoeli:

More of the Roman Forum:

Walking towards the Colosseum: 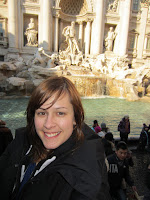 My pictures of the Spanish Steps have disappeared, as did some of my other pictures from later in the trip.  A bit frustrating, to say the least.

After a day full of site seeing, I went back to the hostel where I was surprised and delighted to find that the hostel was hosting a free (free!) dinner for all of the guests.  We all sat down to a pasta dinner and I got to know some of the awesome people staying in my hostel.  For such a small hostel, there was quite a variety of travellers.  I made good friends with K from the US, pictured below.  I'm sad that we parted ways in Rome, since we were travelling different directions, but I know we'll see each other again soon.  (Coachella maybe?)

After dinner a large group of us headed out to get some gelato (YUM!) and some wine.  We then spent the night getting to know each other.  We all bonded over a mutual love of Will Ferrell and Talladega Nights.  Before bed, we all made plans to site see in the morning, starting with Vatican City.

Now, to anyone planning on visiting Rome, and more specifically, Vatican City, when you hear people tell you there's long lines to get in to the museum...trust them.  Seriously.

So after a few hours of waiting in a line that wrapped halfway around the city to get into the museum, we spent a good five hours touring.  And of course, stopped for some tiramisu. 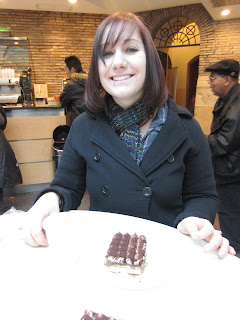 K from the USA! 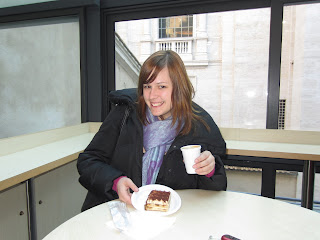 But I will never forget the half hour I spent staring at the ceiling of the Sistine Chapel.  Nothing could prepare you for how spectacular it is.  I apologize that the photos are not fantastic.  There were a ton of guards yelling "SHHH!", and "NO PHOTOS!" the entire time I was there.  We obviously had to be super sleuths in an attempt to get photos.

After leaving the Sistine Chapel, we were spent.  We snapped a few more photos and then headed off for some dinner nearby.

After dinner, we returned to the (deserted) Vatican City for some pictures outside the Cathedral. 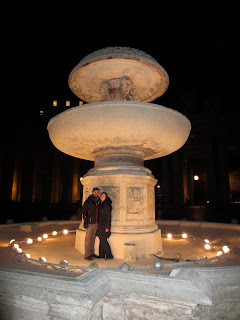 Afterwards, we decided to have a little drink before joining some more people from the hostel on a night out.

Once we met up with all the other hostellers, we headed for the metro. 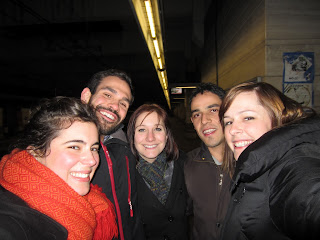 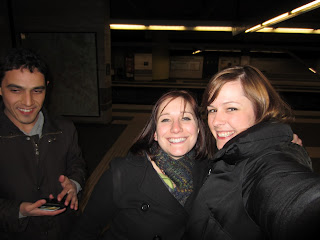 We got off at the Colosseum (because, why not?), and began our search for somewhere to go out. 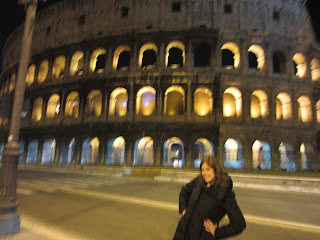 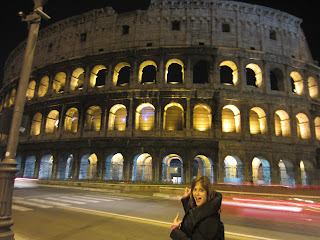 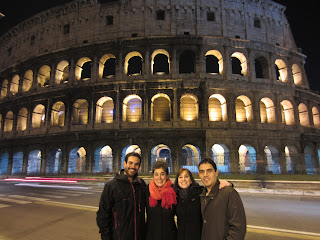 We found a Canadian (!) trying to get us to board a bus to a club (at a 20 euro charge...yeah right!), but we entertained his speech for a bit.  After that, we continued our search...

Moral of the story: we never found said club, or any club for that matter, but it didn't matter.  We got to explore the city at night and I got to know some amazing people.  I haven't posted any of the museum pictures, but I will in a separate post, or maybe in a link to a photo hosting site (photo uploads take forever on here).

But that was my time in Rome.  The next morning, I got up bright and early to hop on a train to Florence.  And you'll hear all about it...in my next post.  :)