Koda and the Bottle

N, my host mum, came home with some great dog toys for Koda, but this toy was by far my favourite.  And apparently, Koda's favourite as well.  She seems to like it a bit too much.

My host family graciously offered me two tickets to go see the Geneva Servettes (ice) hockey team play Tuesday night.  The Servettes had been losing for a while, so they hoped my attending would change up their luck.  My friend Lu was able to join me, so we made a night of it.

I've been to my fair share of hockey games, so I thought I knew what to expect.  I was wrong.

Swiss hockey is so much better!

The crowds at the game need to be separated by their team loyalties.  The reason?  If the players start to fight, so will the crowds.  There is a constant cheering section for the home team behind the net.  And when I say constant, I mean constant.  They have a cheer leader with a mic and a man on drums to keep the beat.  Then the cheers continue the entire game.  I was impressed.  No need for an organ.
Other differences?


In the end, it turns out I'm a good luck charm.  The Servettes came back with a 3-1 win, all goals scored in the final period.  It was an amazing game and I can't wait to go again! 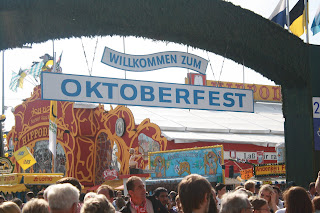 This past weekend, I met up with my Canadian friend K (yes, the same K I went to Interlaken with) in Munich.  She has been touring around Italy since we last saw each other, and unfortunately, this weekend was the last time I'll see her in Europe.  She heads home mid-October after almost 4 months in Europe.  I will miss my travel buddy terribly, but will see her again at Christmas!

Anyway, back to the story.  Back when I first arrived in Switzerland, K mentioned the idea of Oktoberfest.  Since it is an incredibly popular festival and a frequent item on peoples' bucket lists, we decided to book ASAP.  Good thing we did.  The hostel had very few rooms left.  After booking the hostel, I booked my flights and we were all set!

Friday night, I got a ride from P to the airport after he generously offered to take E to football practice and me to catch my flight.  From the start I knew my journey to Germany would be less than worry free.  It all started with the check-in desk attendant questioning the size of my carry on luggage.  She was trying to convince me to check it, but I managed to prove to her that it would fit in the compartment by shoving it into the little measuring doo-hickey they had.  It took some effort, but in the end I got a nod from the attendant.  And I walked away with my head held high.  Until I check my first flight.   It ended up being delayed half an hour.  I managed to catch my connecting flight in Zurich in time thanks to the wonderful Swiss Air on-board staff.

Despite the cost of flying with Swiss Air, the services are worth your money.  Once we had been delayed, they were quick to send me an SMS letting me know (although I was already at the airport, but that's beside the point).  Then they presented us with amazing Swiss chocolate and a complimentary beverage. After that, they ensured we all knew where to go for our connecting flights.  I know a lot of other airlines do the same, but the fact that it all came with chocolate just made my night.

My connecting flight was with Lufthansa and as I boarded, I was greeted with a Toblerone.  Yes!  I love Switzerland.  The flight was quick, and soon I was landing in Munich.  Unfortunately, the Munich airport is not as centrally located as the Genevan airport, so I had to take a 40 minute train ride.  And that 40 minute train ride turned into a 50 minute train ride because of some German issue (the announcements were in German, so I had no idea what was wrong.  But it sounded like a very German problem).

At 11:30pm, I finally met up with K at the train station Starbucks.  It was so great to see her again!

Now for those who have never been to Oktoberfest, I feel like you must be warned.  Don't expect people in lederhosen to just be hanging around the fair grounds.  No, they're everywhere.  The train station, the grocery store, and the local mall.  They're also passed out everywhere.  No matter what time of the day, expect there to be someone out stone cold on the sidewalk with a half-empty bottle of beer still in his or her hand.  Oh, Germany.

Our hostel (Euro Youth Hostel) was just around the corner from the station, and was (for lack of another word) popping.  We quickly checked in and decided to spend the night in at the hostel bar.  We met some cool people from Ottawa, Jersey and California, and some very strange people as well.  But it's Oktoberfest right?

We called it a night around 2am since we planned on an early morning to get a spot in a beer tent.  In hindsight, it probably would've been a good idea to set an alarm.  So we got up around 10:30am and slowly got ready. We stopped at the local supermarket and got ourselves breakfast for €2,50 (altogether!).  Those of you who live in/near Switzerland, you know that this is so much less than what we would've paid in Geneva.  I was blown away.


By the time we finished our breakfast and made our way to the Oktoberfest grounds, it was just past noon.  We figured it was still early enough that we could wander the grounds then get a spot in a tent.  Boy were we wrong!


After standing in the hoard for 90 minutes, K and I decided to give up.  We purchased our souvenirs then decided to walk around Munich and find another beer garden.  Thankfully we did.  The trip got infinitely better the second we left the festival grounds.  I got my stein(s) of beer and we met some really cool people.

Munich is a great city and I can't wait to go back when there aren't thousands of drunk tourists falling all over the place.  I am happy to say I *ticked* Oktoberfest off my bucket list, but I don't plan on going back.  Great experience, but definitely not one that I can't find somewhere else.  You live, you learn.

How was your weekend???